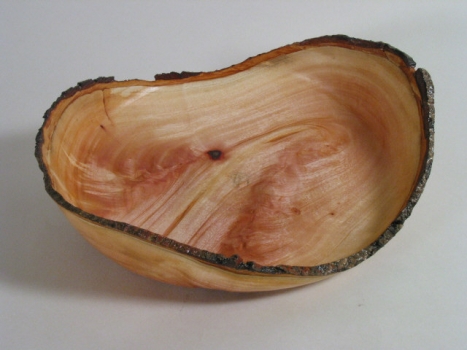 (see below for more details about the meeting)

At the August 23rd meeting Vice President Jim Rinde presided.  Thanks go to Sam Turner for bringing refreshments.   We decided to keep the  Trebuchet made for the AAW’s Collaborative Club Challenge so that it can be used  in our local activities.  When  we replace it with another project then we might consider selling it or giving it to the AAW to auction.  David will store it until it is needed.  Jim suggested that we might start on a subsequent Club Challenge  for next year or work on a two year project.  He requested that members bring ideas for projects to the next meeting and asked for a volunteer to lead this activity.  The experience of doing this year’s project allowed those who were involved to expand their turning skills and was lots of fun besides.

Sam Turner gave a report on the Ventura County Fair.  Everything went smoothly this year.  Our members’ support was outstanding with many entries in all of the new categories.  Sam reported on the comments made by our Judge, Dan Hogan.  He had specific thoughts on many of the pieces as to what he liked and what might have been better.  In general more attention to details of sanding and final finishing would have helped many of our pieces.  Dan’s design comments were useful and we will continue to discuss what goes into design elements at all of our meetings.  In many ways design is just as important as tool technique.

One of the people who saw us at the fair has requested someone to make a salad bowl on commission.  If you are interested contact David Frank for details.

Friend of the Club, Howard Ford, is in the process of moving.  As a consequence he gave us many assorted pieces and logs of Italian Cypress and other species  which would make excellent turning blanks.  They were available on a  first come basis along with some avocado and ponderosa pine that David had prepared for the demonstration.  Howard requests that we send him photos of work we do from the wood he donated.  Let David know and he will take photos at the meetings.

At the request of several people we have added an Update Page to the web site.  This will list any changes since the last newsletter was posted.  For example if the program schedule has changed (it has) or if more photos are posted in the gallery section.  Also last minute changes in meeting plans would be announced both by email and on the update page.

Vic Silveria and Joe Jedrychowski  have joined as new members.  Name tags for them and anyone who has lost theirs will be made by the end of the year.  Let David know if you need a new name tag.  The cost is $5 if it is a replacement.

David Frank provided the meeting demonstration with a discussion of Natural Edge Bowls.  Using examples from his collection he illustrated various choices for orienting the turning blank to get different effects with both end-grain, burls, and more common side-grain positioning.  Out in the shop, green avocado blanks were available for anyone to practice with.  A few photos (thanks to Ron Lindsay)  from the meeting are at the end of this page.

Additional information for the September 20th meeting:  Bill Haskell has a full program planned for us so plan to stay until mid afternoon.  Bill’s work can be viewed on his web page at  www.homestead.com/bhask . We are asking for a $5 donation so lunch can be provided.    The meeting location is at Dan Halpert’s home.   Bring an extra folding chair or two if you can.  We will have show and tell as usual so bring any new work you wish to share.  Also bring any wood that you have obtained to share with members.

Note  that there is no meeting on September 27th.  The next special meeting is at Chuck Stevenson’s shop on October 4th when Lyle Jamieson will do an all day demonstration starting with basic technique and working up to the use of his special tools for deep controlled hollow turning.  Since this is a special demonstration there will be a $25 fee.  PleaseRSVP to save a spot by giving your check to Treasurer Ron Lindsay at the September 20th meeting [Make the check out to Ron Lindsay].   To see some of Lyle’s  work check his web page  at www.lylejamieson.com.  Contact Lyle at ar785@tcnet.org if you want to arrange individual hands-on-teaching.

Our regular October 25th meeting will be at Russ Babbitt’s home. 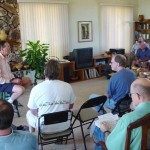 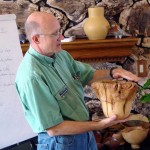 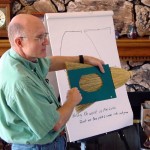 Using a broom and bowl template as suggested by Bruce Cohen to understand grain direction and proper tool technique. 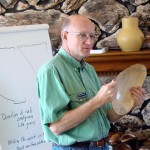 This very thin natural edge bowl was made by David Ellsworth at a demo session for the AAW symposium. It was sanded and finished by member Seth MacArthur. Here it is used to illustrated that consistent wall thickness is needed to give the natural edge rim a consistent width. 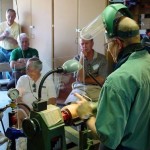 In the shop getting ready to rough turn the outside of a bowl. 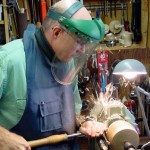 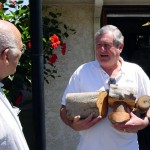 Harvey with some of the wood donated by Howard Ford. 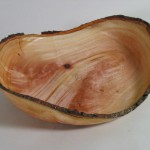