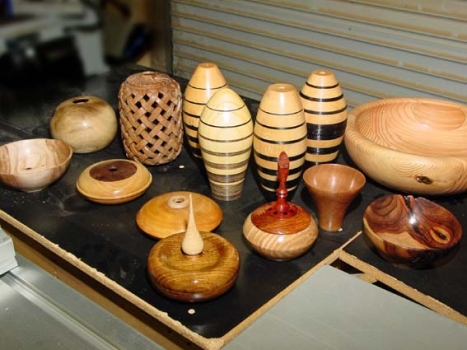 Tips and Tricks plus

As those who are on our e-mail list or who attended the March meeting realize, the planned demonstration by Linda Salter had to be postponed with two day’s notice.  She sustained a cracked rib in a fall and was unable to travel.  We will reschedule her for latter in the year so watch the program schedule page as it gets updated.

Instead we had an impromptu but excellent program on dealing with green wood.  This was prompted by Tim Albers of Mission Pro bringing two pickup trucks and a huge trailer of freshly cut Avocado Wood and President Martha’s landscaper dumping a huge pile of freshly cut Ash on her lawn.  With all of this green wood we had the makings of an excellent topic for the meeting.

First, Ron Lindsay spoke on the shrinkage patterns in 3 dimensions that wood goes thru as it dries.  This must be considered both in turning the wood while it is still wet or in cutting it longitudinally and sealing the end grain so that it is less likely to crack or check while it dries for later use.

Second, Al Geller demonstrated how to safely shape the outside of a side grain bowl from a block of green wood rough cut with a chain saw.  He first did this with a block of avocado wood (natural edge) and then with a block of ash.  His main emphasis was using a side grain cut using a bowl gouge and cutting with the direction of the grain fibers rather than trying to hog out a round surface against the end grain.  Never use a roughing gouge on side grain! It is designed for spindle work only.

Third, Jim Rinde demonstrated the use of the microwave to reduce the water content by about 30% which brings the green wood down to about 10% water content which is stable for our climate.  He successfully does this with large chunks of wood that if dried slowly would crack, and is only limited by the size of his microwave.  Using an accurate scale to weigh the wood he microwaves on high for 15 minutes or more, then reweighs the wood.  Spraying the outside of the wood block with water between microwave session seems to help prevent checking as the outside dries faster than the inside.  He divides the weight of the wood in grams by 65 to get the first time estimate.  This brought the ash down to 15% loss (in his sample this took 15 minutes).  And so his next run was 7 minutes which brought the wood to 30% loss and it was ready to turn as dry wood.  His method seems to prevent much of the wood movement that we see when the wood is allowed to dry slowly.  Although some of the pieces distort in shape they develop surprisingly few cracks.  Jim’s article describing this process in detail appears in the Fall 2005, Vol. 20, No.3 issue of the American Woodturner.

Photos from this meeting are below.

Eight new members joined at the March meeting brining the club’s membership to about 64.  Since many of out new members are just beginning to use the lathe, we have changed the program for our next two meetings (April and May) to a very short Tips and Tricks presentation and then do a defined hands on session with specific mentors at each of the 5 lathes that we can set up at Russ’s shop.  We also encourage new members to make contact with one of the mentors listed on the officers page and take the opportunity for free one-on-one hands on training.  This is the best way to get started.  Also make use of our extensive club Loan Library of videos and books.

Member Chuck Stevens who will be coordinating our participation in the Ventura County Fair this summer is also President of the Channel Islands Woodcarvers.  He has invited us to participate in their October show.  Turned pieces would be judged separately from the carvers, and it is a chance to sell your work; more on this later.

In the next few weeks we will again be attempting to switch our email list to the Google Channel Islands Woodturners group that we have set up.  This is hidden and you can’t search for it.  It will only be used to send email messages to members and friends of the club.  You will receive a message directly from Google saying you have been invited to join the group by clicking on the link that is in their email.  Please do so or you will miss out on future emails.  You do NOT have to obtain a Google account of your own to participate (although you can if you want).  This is not set up as a chat room or a forum but only as our email distributor.  This allows it to be off of your editors’ computer and also that of Ron Lindsay our treasurer who is taking over the job of keeping our membership list up to date.  Thanks Ron!

If you view our website and wish to be on the email list so you will receive messages such as the last minute change of program in March, send you email address to Ron via the link on the officers page. 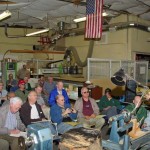 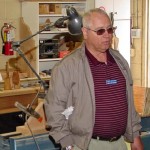 Chuck discussion joining the CI Woodcarvers for a show in October 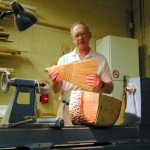 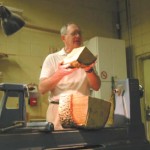 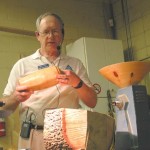 Ron with two end grain turnings made from green wood 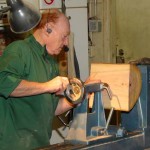 Al mounting an avocado blank for a natural edge bowl; he adjusts the tailstock end so the peaks will be equal at the headstock end which is the top of the bowl 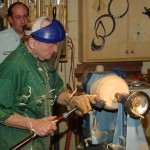 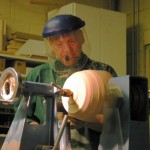 At the top of the natural edge bowl he is cutting “air” part of the time and we can see thru the valleys and view the headstock. 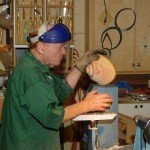 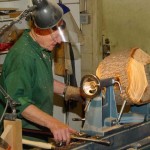 Large block of green ash ready to turn; note the bark has been removed from the area where the tail stock sits. 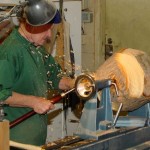 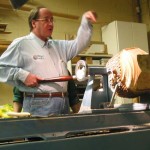 Russ showing an alternative way of roughing out with the handle more horizontal so the force is down on the tool rest preferablly over the post. 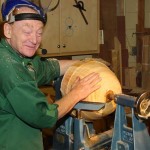 Al very pleased with the outside surface 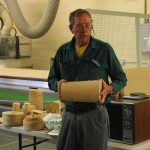 Jim discussing use of microwave to dry green wood. Large blocks can be done limited only by the size of the microwave. Water flows out of the end grain. 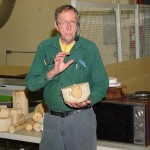 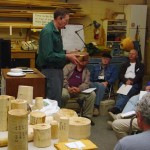 Multiple pieces of ash which he had dried in the past week. He is holding a round of black acacia that he had dried several months ago. It has remained unchecked and has actually gained weight as it has acclimated to his local humidity. 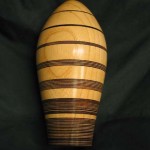 This hollow form (in two parts) was dried 2 days ago and turned. See the next photos for more examples. These have remained stable since the wood is dry when he turns it. 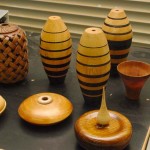 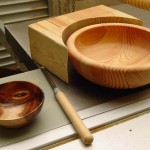 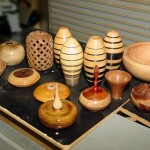