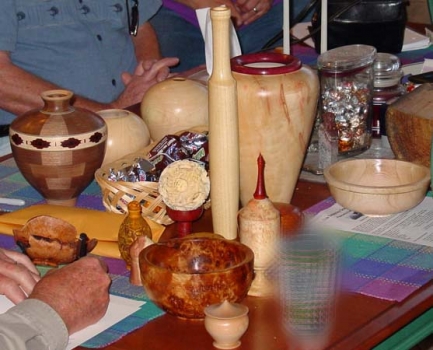 Meeting Information: No meeting in December

The Holiday Social is December 9th for members and spouses only.  Members have received information by email and phone.

Seasons’ Greetings to all and we will see you next year.

The tentative program schedule for 2007 is still a work in progress.

At the November meeting the election of new members was held and the new officers for 2007 have been posted on the Officers and Mentors page.

The members ratified the recommendation of the executive committee that Dues for 2007 remain at $25.  If you haven’t already done so, please renew your membership now by sending your check to Ron, our treasurer, made out to “Ron Lindsay” .  Also we will increase the cost for the all day professional demonstrators’ fee to $35.  The demonstrators are charging more and we are up grading our TV monitoring system and camera to better enable those in back to see the demonstration.  We still intend to provide lunch at these demonstrations.

The members also agreed that our policy of replacing missing videos from the lending library from club funds should be changed to charge the person who last signed out the video; (some of the videos can be quite expensive) so please make sure you sign in the video when you return it and if you hand it to another member get him to sign it out.  Our librarians Russ Babbitt and Judy Grange will help with keeping this straight so get the sign out book from them.  Check the Loan Library list and see if you have any of the missing items.

Another change that was announced is that our hands-on sessions will no longer be held at Russ Babbitt’s home.  Russ is one of the original members of the club, he has served multiple terms as president and all the other positions (often at the same time) and has been instrumental in holding the club together during our lean years in the early 1990’s.  He has been most generous in allowing us to use his shop for the hands-on-sessions for the past several years, but now that the club membership has grown to over 70 members we have out grown his space.  Joe Levy our new program chair is negotiating with one of the local community colleges for use of their woodshop to hold these teaching sessions.  The shop has many advantages in terms of more lathes and the instructor is very much in favor of this arrangement.  Details with the school district are still being worked out.  A tentative program schedule for 2007 has been posted but is still a work in progress as Joe lines up professional demonstrators.  It is likely that we will ask people to bring their own lunches if they plan to stay longer than noon.  This partly depends on how long the shop will remain open to us.  Details to follow as this develops.

The last meeting of the year on November 25th was a hands-on teaching session at Russ’s home. (Russ again made a great pulled pork BBQ sandwich lunch for us which we will miss at our new location!) After a quick show and tell session we were treated with a brief description by member Warren Brown of his cut-as-you-go method of making segmented rims or multiple layers which is less complicated than the formal segmented turning method as described by Linda Salter in October.  Warren’s method is described in the Projects section under Segmented Rims.  Warren demonstrated his method during the hands on teaching session simultaneously with several other beginning turners learning from our mentors.  See the photos below. 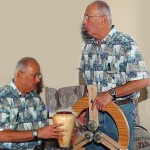 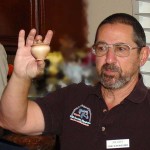 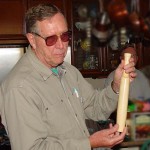 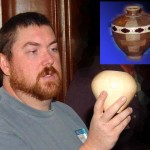 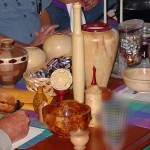 Show & Tell table. Bruce got the “ivory” Chinese ball (balls within balls) on his trip to China. 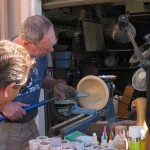 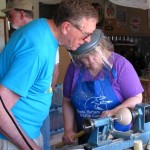 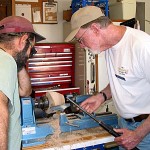 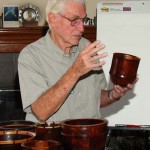