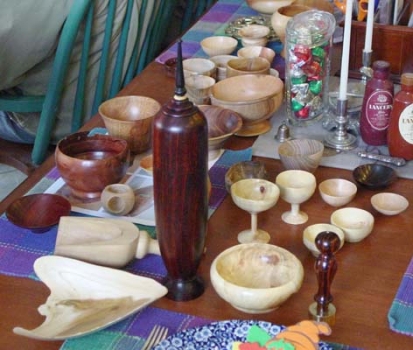 The first meeting of the year started us off with an enthusiastic gathering of over 20 members and two guests new to our club:  Steve Garret and Stephen Case-Pall.  Stephen has already joined bringing our membership for 2004 to 29 and after the last returning members pay their dues we will be over 30 again, despite several members from last year moving out of the area.  If you plan on rejoining for 2004 and haven’t yet paid your $25 dues to treasurer Ron Lindsay, please give him a call and arrange to so ASAP.  New members can join at any time, but at the February meeting a Printed Copy of the membership list will be distributed and you are sure to want to be listed.

President Jim Rinde and program chair Joel Oksner announced that the  Holiday Social  will be on December 4th this year and that the program schedule has been expanded to include a members and spouses picnic on July 10th.  Apparently our spouses got together at last December’s Social and repeated their request for this event.  Jim is the likely host and  announced that the thin-walled natural edge bowl that Lyle Jameison turned during the October 4, 2003 demo was finished by Al Geller and will be given away as a door prize at the picnic.  Click on these links to see the photos from the Lyle Jameison 2003 Demo and the Bowl that Al finished.

From President Jim: I was overwhelmed with the response to the January Monthly Challenge. The number of people participating was more than I expected and the quantity of bowls turned was amazing… someone turned six. I was especially impressed with the willingness of inexperienced turners to show their work knowing that it would not win “best of Show”. The quality of work was also impressive…a number of thin wall bowls from inexperienced turners. Great work! [see photos below]

For February the Monthly Challenge is to continue the theme of thin walls, but now increasing the size to 6-12″ in diameter. Happy turning. Jim Rinde

Details for the February 28th meeting: Our February demonstration will feature Steve Dunn from Lomita, Ca.  Steve is a well-known and recognized wood turner and presenter.  Steve also owns High Figured Hardwoods and will bring a trailer full of woods to the meeting for sale; he claims his prices can’t be beat!  Steve is also involved in bringing nationally known instructors to his wood turning classes.  Steve will demonstrate long-stemmed goblets during the morning segment and his method of making lidded boxes during the afternoon session.  Lunch will be served around noon. The cost for this demonstration is $25 and includes lunch.  The meeting will be held at Chuck Stevenson’s shop in Camarillo.

Russ Babbitt led off our hands-on-workshop session with a discussion of his personal journey in learning sharpening techniques.  He then showed a 15 minute segment form Mike Mahoney’s video From the Tree to the Table which graphically demonstrated the differences in sharpening of the classic bowl gouge grind compared to the currently popular swept back or edge-winged grind.  The video demonstrated that both grinds are useful for different types of cuts and locations both inside and outside of bowl shapes.  We then gathered in Russ’s shop where he demonstrated grinding techniques.  With the use of 4 lathes everyone had a chance to practice turning with the great variety of bowl gouges grinds that we brought to the meeting. 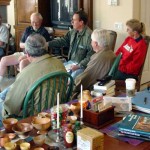 President Jim Rinde on the far left leading the meeting. 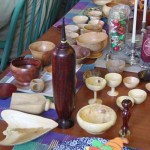 A small portion of the Show-n-tell table with many 3″ bowls. 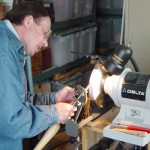 Russ has offered to hold a special Saturday session on turning pens.  If you are interested in scheduling this call him directly.  This is one type of one-on-one or small group mentoring that our club will be setting up as a formal program opportunity for members in the near future.

The photos from the December 2003 party are now posted!