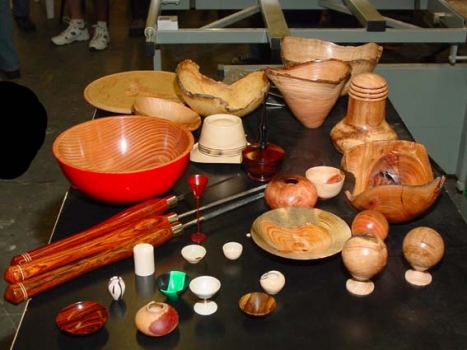 Meeting Information: Saturday, April 16th, from 9 am to Noon

Art Waldinger: How to photograph you own work

At the March meeting we welcomed 4 new visitors who had seen the notice in the newspaper and welcomed John Knittle as our newest member.  Since we have had so many new members over the past year, president Al Geller had everyone introduce themselves and say a few words about how they got started and their current areas of interest within woodturning.  Al announced that the AAW has given us the Educational Opportunity Grant that he applied for to buy extra tools and chucks to go with the grinder and sharpening jig that the club has already  purchased for our mentoring program at Cabrillo Middle School.  We will be starting this semester, and additional volunteers are needed.  Give Al a call if you are interested.

We had a very interesting Show-N-Tell session with many entries for this month’s challenge of a turning under 3″.  David Frank and Bob Pettit were appointed judges by default (having not entered a challenge piece) and narrowed the choice down to 4 excellent pieces.  Three of them were withdrawn from competition by their makers, since they already owned a copy of the prize book (500 Wood Bowls), so Joel Oksner was named this month’s winner.  The challenge for April is a natural edge bowl.

The April program [Note that it is one week earlier than usual!] will be presented by member Art Waldinger.  Art is a professional photographer and master ceramic artist who has been attracted to woodturning.  He will be doing a hands on demonstration on how to take your own photos of your turnings that will have the quality to be published, submitted to a gallery, or more important to your editor be used on this website!  Bring your camera and up to five of your current or best liked woodturnings.  Art will teach us how to take the photos using natural light with a simple easily transported background and no elaborate equipment!  Your photos can be entered into the gallery section of the website which needs updating and additional representation.  Just because your work isn’t prime-time-ready for high-end gallery display, bring it anyway.  We want to show a progression of experience from beginners to advanced turners.  The purpose of our club is to teach and we have been remarkably successful in doing this.  Let’s show it in our gallery section!

The February demonstration by Al Geller was an excellent example of the depth of experience and knowledge among our own club members.  His Demo appears on a separate page in the  Projects  section with photos and descriptive text.  Al also gave out several handouts on sanding and finishing which you can get from him or the club library.

The Sunday after our last meeting Russ Babbitt held an informal demo at his shop on how to make pens. Three members attended. The planning was last minute, but the members who attended were satisfied with what they learned. If any other members would like a chance to learn how to make these craft items please email, or let Russ know at the next meeting. 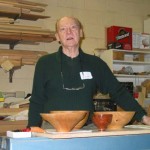 Al leading the meeting with some of his bowls visible 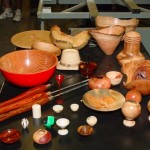 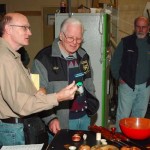 David and Bob judging the under 3″ challenge 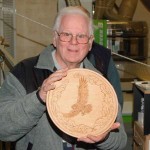 Bob with his chip carved owl on turned platter 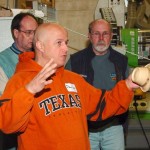 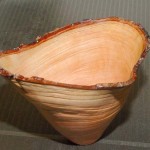 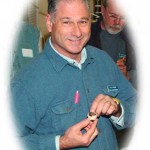 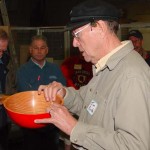 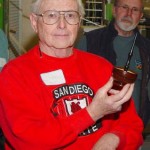 Stephen with a cocobolo and ebony lidded box 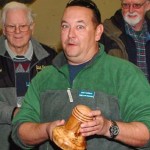 James with his lidded box 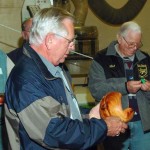 Jim with a natural edge bowl 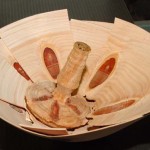