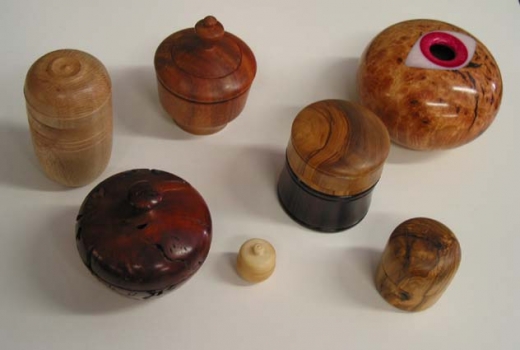 Meeting Information: Saturday, September 24th, from 9 am to 4 p.m.

August was again a very busy month with the  Ventura County Fair 2005 (more photos have been added of booth activities), and the excellent meeting on August 28th featuring our past president Jim Rinde giving a demonstration of use of the boring bar for deep hollowing of vessels.  Photos from the meeting and Jim’s presentation are below.

The school mentoring program at Cabrillo Middle School started Sept. 1st and is in full swing right now.  If you have time to contribute contact President Al Geller and sign up.  The kids are a pleasure to work with and eager learners.

The meeting this month, Sept. 24th features J. Paul Fennell.  We can only accommodate 35 people so be sure to reserve your spot by calling or emailing Al Geller.  The fee of $25 covers our costs and includes lunch.  The following are several links to sites that feature Paul’s work and will give you a short biography and indication of what he will be presenting: del Mano Gallery – Bio -J. Paul Fennell, del Mano Gallery |photos| J. Paul Fennell.  J. Paul Fennell is a wood-turner whose interest in creating original objects from the lathe dates back to the early 1970s. His thin-walled hollow forms are turned from woods of unusual colors, figures and grain patterns, mainly from native American species, but sometimes from imported woods as well.  The vessel forms are derived from variations of simple but pleasing classical shapes ubiquitous throughout civilization. To enhance the work, experiments are continually made to explore variations in surface texture, bleaching, gilding and carving. 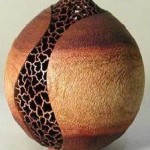 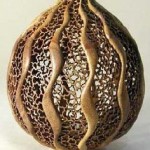 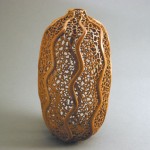 Photos from the September meeting: 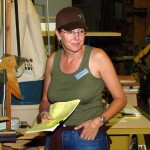 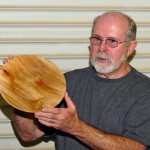 Doug with a very nice platter 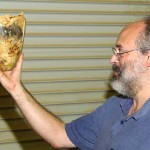 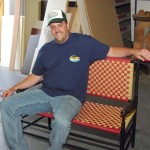 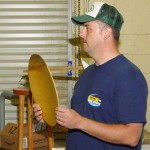 Rob with a 16″ pine platter 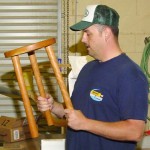 Rob with his Tall Milking Stool, just his size but the tall cows are hard to find 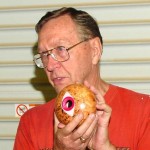 Jim with his hollow-form eye 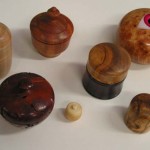 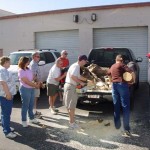 Tim with a truck load of freshly cut lemon wood 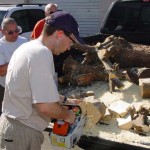 Photos from Jim Rinde’s presentation on the use of the boring bar: 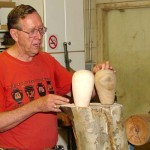 Jim with two hollow forms he turned last week as examples from a log like the one they are sitting on. End grain. 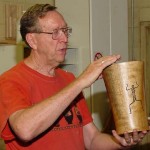 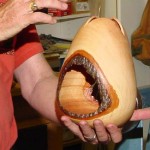 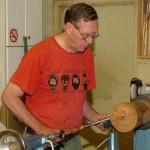 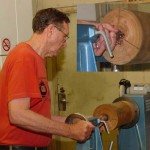 The initial hollowing is done with a forstner bit to the chosen depth. Inset show the frequent need to clean out the shavings 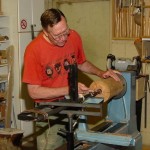 Using a level the boring bar is set with the cutting edge at center point and the tool level on the tool rest and the secondary back capture rest. The wires on the end are for the internal light system that Jim used prior to laser systems being developed 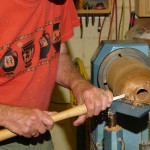 After the intial hollowing to the top part the outside is shaped before the remaining bulk is hollowed- this adds stability at this stage. Each part is finished before additional hollowing is done. 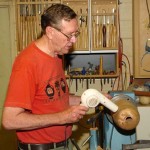 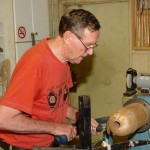 Power sanding the top portion that has been dried. Normally he would sand to the final grit at this stage before proceeding to hollow deeper 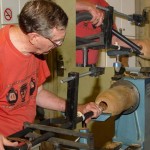 Hollowing out the next section as he proceeds deeper into the form. The inset shows use of a shop vacuum to remove savings 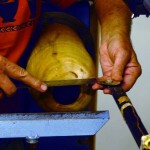 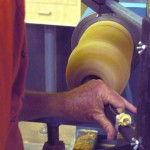 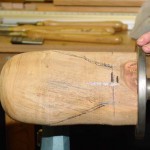 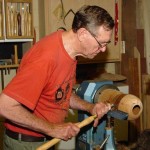 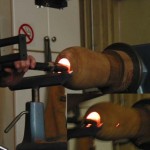 Using his original internal light system – a 12 volt halogen car lightbulb run at 24 volts- shows the wall thickness thru light colored wood easily- here it shows on the endgrain at the top and in the inset thru a natural defect in the wood.