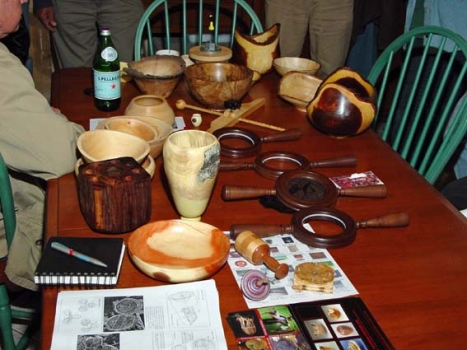 Tips and Tricks II, plus

The April 22nd meeting at Russ’s home was exciting and we are repeating the same format for May.  We began with Vice-President Bruce Berger leading the meeting.  The two woodturning shows, one in Cherry Valley at the Edward-Dean Museum (click on Events at the bottom) featuring our Trebuchet, and the other in San Luis Obispo California Contours 2006  (look toward the bottom for upcoming events) were mentioned.  Several of our members have had work accepted at this juried show which runs from May 12 through June 25th.  Go early as everything is for sale and will disappear as it is sold.

Program Chair Joel Oksner announced that the Linda Salter demonstration on Segmented Turning has been rescheduled for October 14th.  Also see the schedule for the rest of year.  Two extra Hands-On session have been added!

We are looking for a member to coordinate our participation in the Ventura County Fair this year in August.  Sam Turner has done this for the past 5 years and will provide information, but is ready to let someone else take the lead.  If you are interested in helping give Sam and Martha a call.

Al Geller, Warren Brown, Ron Lindsay and David Frank presented some easy tricks to help your turning.  We held a quick Show-N-Tell session, and then we were off to the the shop to turn.  We had five lathes going until 3:00 p.m. when the last of us left.  Russ again put on a great BBQ lunch.

We are still in the process of switching to the Google email account.  See the April 2006 newsletter for details.  Your editor will again be sending out invitations to join to those members who didn’t respond the first time.  Ron Lindsay has updated the membership list and this will be attached to the email notice that members receive.  Welcome to our two newest members Sean Khazeny and Gary Toro.

A major update of the Gallery has been posted.  Some members have more photos than others, but all the pictures available have been included.  If you want more of your work in the gallery, contact the editor and we will arrange to take photos.  Also please check not only your own entries but others in case I have misnamed some of the photos. 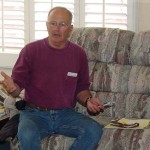 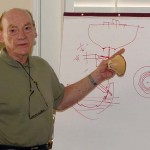 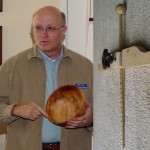 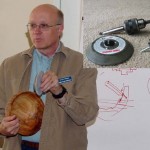 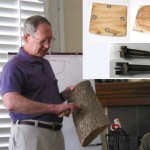 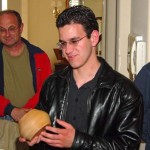 Matt with his first bowl (laminated) turned at school. Proud father in back 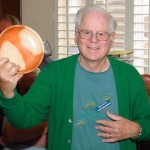 Bob with his Carob bowl 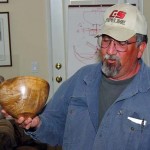 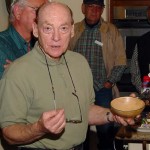 Al with avocado bowl; rim is highlighted with black ink 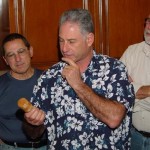 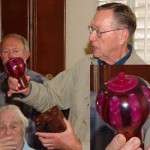 Jim with cocobolo block drilled and filled with epoxy. Hollowed and top glued on to make “Balloon” 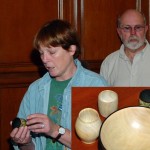 Linda with light colored low-grain bowls which she paints with water colors. 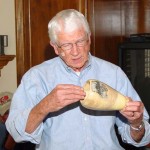 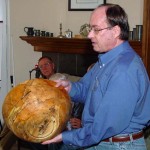 Russ with large nail he found hidden deep in bowl 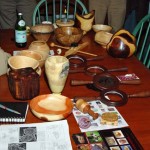